In the interest of understanding the relationships between emissions due to controlled traffic characteristics on a second by second instance, this paper presents the process of simulating, storing, generating emissions and the analyzation of the results. Traffic generated pollution is a common topic of interest for many researchers because of its importance to public health. We explored a smaller portion of emissions, in particular – vehicular emissions activity. The emissions generated on a road within a time period are random – and will depend on the number, types, and speed of vehicles passing within that time period. Since averages are not representative of true exposure, modeling the impact of emissions on people’s health through dispersion models becomes too theoretical and unrealistic.

This randomness may have important consequences for studying and assessing the impact of vehicle pollutants on human health. In this case, we are interested in the variability in emissions for two specific areas of traffic, a four-way junction and a two lane road. For each case, we ran 5 simulations where each simulation introduced a gradual increase in cars. Simultaneously, each simulation was analyzed for two exposure periods, 100 second and 500 seconds. To achieve this analysis, four tools were used to arrive at the our results; SUMO traffic simulator, Python, MySQL Database and R Studio. The results suggest that a probabilistic approach to modeling vehicle emissions and concentrations may be important for evaluating the impacts of traffic emissions on human health, especially when modeling or measuring near road concentrations.

We began the process by using SUMO, a traffic simulator that allows the user to generate car emissions second by second. To begin using SUMO, a Windows, Linux or Mac OS computer is needed with either 32bit or 64bit capacity. Downloading the software is easy and is available for free on the website http://sumo.dlr.de/index.html . To achieve our desired outcomes, 2 graphic user interfaces were used: "netedit.exe" and "sumo-gui.exe.", "netedit.exe" was used to build our road network under the conditions we desired. The interface allows a user to build roads, junctions, control traffic with stop lights and many other parameters. The "netedit.exe" then saves the network as an XML file which will define the road the cars travel on. 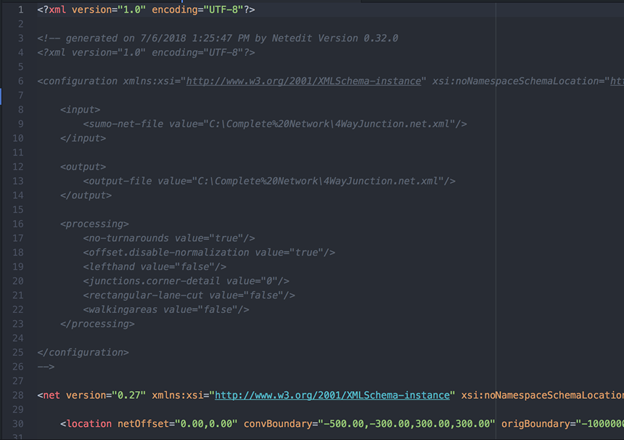 Next we defined the routes the cars would take in a file ending in .rou.xml as well as the amount of cars the road will sustain. 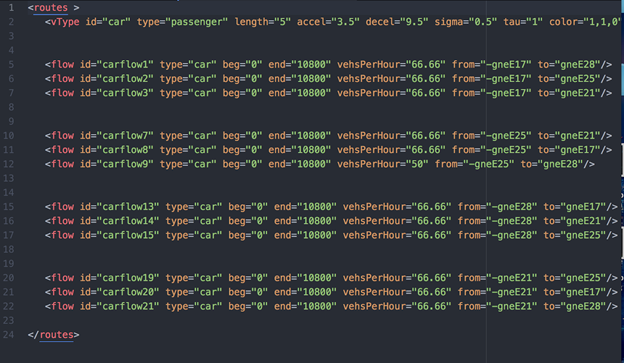 Finally we defined the configuration file ending in sumo.cfg that is used to visualize the simulation. Here we defined the inputs (the net file and route file) and defined the outputs (an emissions output file with second by second information). The user must open and run the simulation in the sumo-gui.exe window to generate the second by second information file. The output of the configuration file is the time separated information of all the cars in the desired simulation (a good practice is to keep all the data we use in a single file or directory so we avoid any errors in coding later).

Because we wanted to extract the data into easy to read tables, we required the use of python to extract the XML file generated by the sumo configuration file. First in the MySQL database, we created an empty table where we would store all the necessary information. We then created this file to sort through each line separated by time, extract the information we wanted, stored it in a temporary CSV file, and then upload it directly into a MySQL database table we had pre made. 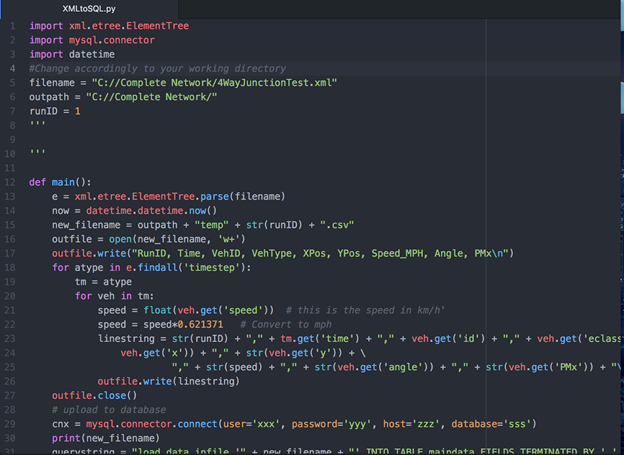 Within the database, 16 tables (along with database settings) defined by MOVES (Motor Vehicle Emissions Simulator) were pre-loaded into the desired schema (the database we choose) for reference in our code in R studio. We also prepared an emissions table with all the desired sections to store the desired emissions information (position, time, speed, type of vehicle, operating mode). The tables in MySQL are cross referenced by the R Code that generates the emission we used to analyze the data.

A lot of computing power takes place in this section because of the amount of raw data that we process, lot of improvements could be made in this code, but it works great for our data. Here we used two pieces of code that first generate the emissions we needed and the second code outputs variance graphs and data results. A lot of the heavy lifting is done by SecbySecEmissions_CN_7_17.R file. Within this R-code, the data was queried to show each distinct vehicle, at each time step until it left the simulation grid. Knowing its basic information, MOVES uses VSP and STP equations to categorize cars into different operating modes. After converting all of the speeds and acceleration points from SUMO, MOVES then generates the emissions using the different tables from MySQL and equations that are provided in the R Code. 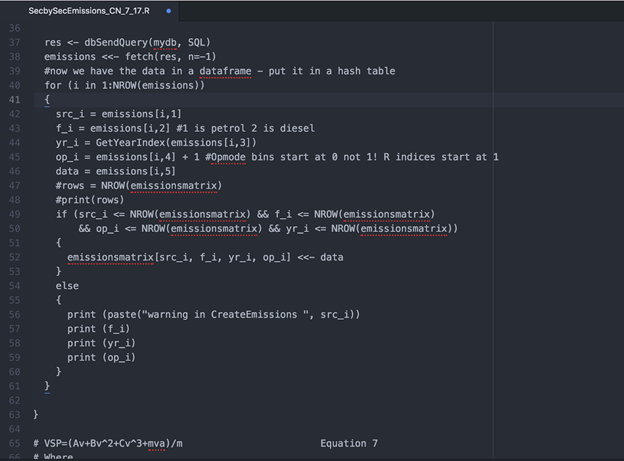 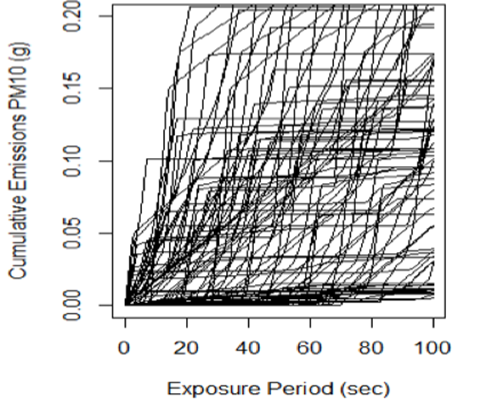 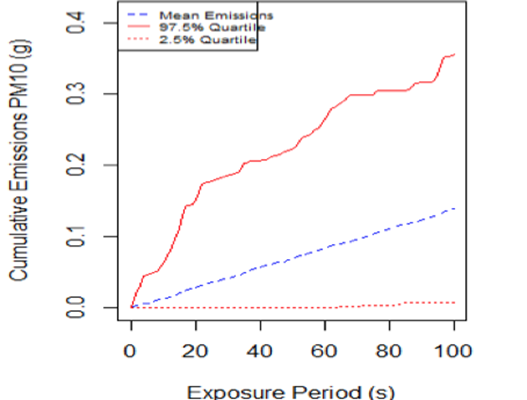 Each instance/line represents a single test subject measuring the cumulative mass of PM10 for the given time period. To remove any correlation from measuring emissions consecutively, we recorded emissions staggered by 20 seconds. 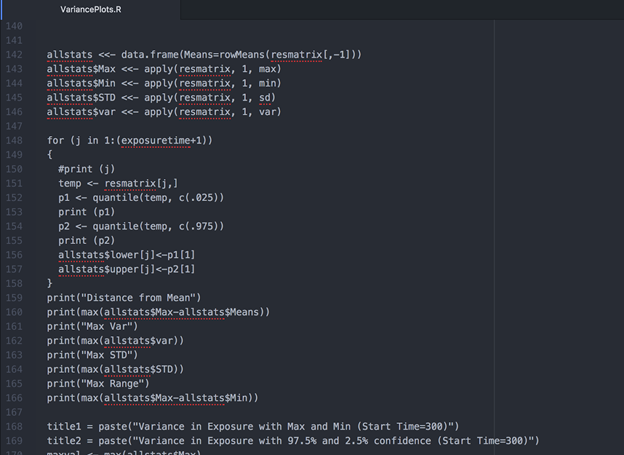 To get a full grasp of how the variability changes, we analysed 5 simulations with the following changes as well as the results in how variability changed with more exposure time, and with increasing car flows.

These are the results we generated for the two traffic networks for the 5 simulations: 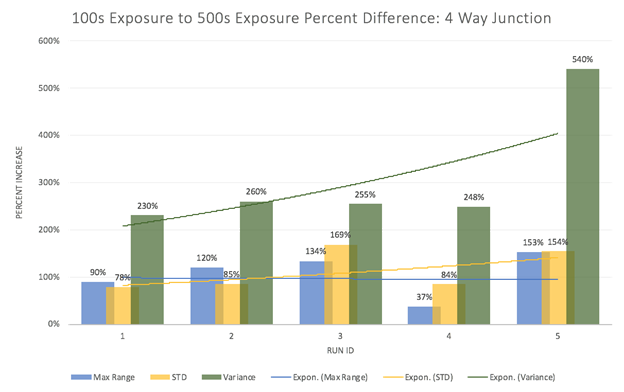 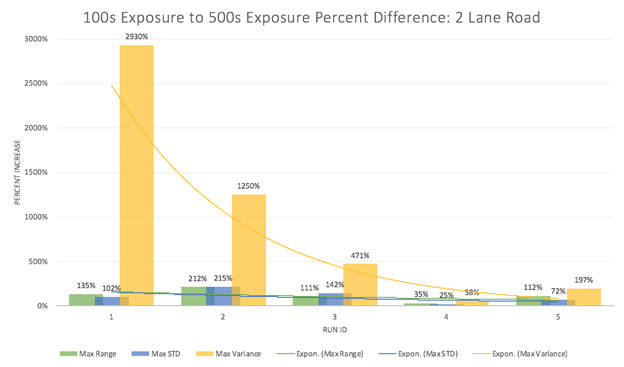 The traffic generated through SUMO and the emissions generated with MOVES allowed us to generalize the effects of exposure times. Higher exposure periods usually lead to higher variations in cumulative emissions, where in most cases, increasing car flow has no considerable effects. With these outcomes, we can think of areas with high stop and go traffic to have the most varied cumulative emission as exposure time increases. While areas of high speed and constant motion tend to have high variation with longer exposure with low car flows, but decrease as more cars added.

The methods used in this study can be used in a variety of studies by any researcher or anyone who is interested in the topic. The basic framework can be implemented in scenarios related to traffic modeling, emissions, pollutant exposure, and can enhance the accuracy of dispersion models, with few alterations to the source code. Implementing a dispersion model to generate second by second concentrations would be the next step towards a full chain model where traffic, emissions, dispersion, exposure and health impacts are evaluated simultaneously. This full chain model would allow researchers and others alike to trace and identify, health impacts, potential solutions and policy changes that can then further protect our environment as well as our quality of life